Monastery Of The Mangy Wolf

Our latest update is a mini-feature revealing the overhauled Monastery Of the Mangy Wolf. Home to Rufus Pu and his hairy Were-fu practising minions, the snow peaks of this winter tundra are one of the key locations you will be able to explore in the upcoming demo.

Drawing inspiration from the magnificent Buddhist temples and palaces found across Asia, comparisons will inevitably be made with Mists of Pandaria. The location was written into the Folk Tale script 18 months ago, and rather than remove it we decided to press ahead and include it as an example of the varied and detailed environments you can expect in the final release. It's the final environmental zone to be included in the demo, joining the rolling green hills of the village hamlet, arid desert of the ogre mines, the volcanic old forge, and the goblin swamp. 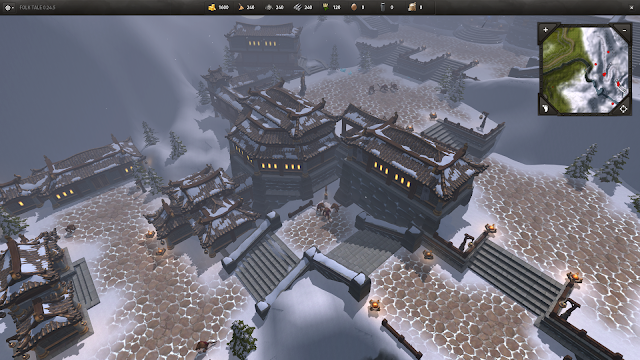 To pack so many environments into a single level, we've broken the single large terrain into 25 separate chunks, and the total per-chunk texture count reduced from 27 to just 8 to reduce draw calls and ease fill rate issues we started noticing on older GPUs. While this sounds like a step backwards, it's actually allowed us to add more terrain textures than previously. The only downside was that all the chunks needed a complete and time-consuming repaint. 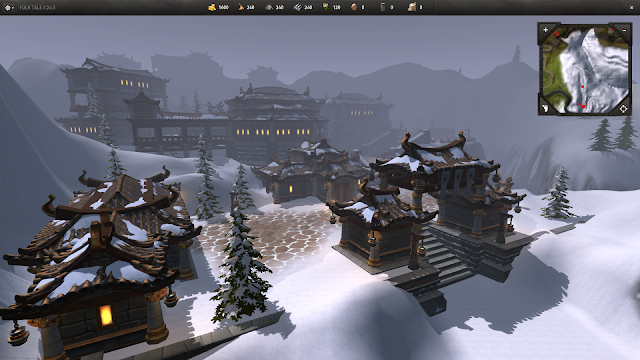 To further push the amount of texture detail, we've added a vertex color blend shader for the Monastery courtyard. This enables us to blend from snow to cobblestone/snow in the grooves, and finally into cobble without having to include the cobble textures in the terrain. It's an old-school technique we'll be using increasingly throughout development.


Looking skywards, the previous static photo skymap has been replaced by a dynamic sky dome system that grants us control over colour gradients as well as moving clouds. Overall the effect is far more consistent with the hand-painted art style.

Tom has been pressing ahead with cut scenes and is now celebrating not only Christmas, but the completion of all the draft versions which marks a significant internal milestone. For a small indie team, the inclusion of voice acted cut scenes is a major undertaking, but essential for story-telling. We just don't like the moving 2D approach that a number of recent AAA titles have taken. It's unlikely we'll include footage from the cut scenes in WIP videos as we don't want to spoil the enjoyment you will hopefully get from the demo.


There's lot more been happening beyond what we've listed here. We've added flow mapping as part of a test to improve the look of liquids such as lava. Hayden is near completion on modelling and painting the kobolds that feature early game as combat practice. In programming, a lot of feasibility work has been done on multi-player including adding a chat server which we're considering leaving in the demo to allow gamers to chat with the dev team. We've also been extending the code for loot attributes which impacts combat and crafting. By adventuring out beyond the relative safety of your village, you'll be able to find magic items that your villagers can equip to better perform their occupations, or transmute into crafting resources to make your own items as you find recipes.

Heading into the New Year, our focus will shift to UI and modelling loot, unlocking a lot of the games written but inaccessible functionality. And then its into testing, launch our Kickstarter campaign, and release the demo. We'd like to thank everyone that has signed up for beta for their continued patience. Things are taking longer than we'd hoped, but Folk Tale really is shaping up very nicely, and hopefully you'll think it's worth the wait.

All the latest info from Games Foundry and our upcoming PC/Mac title Folk Tale.